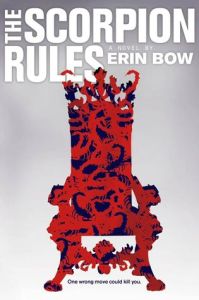 A world battered by climate shift and war turns to an ancient method of keeping peace: the exchange of hostages. The Children of Peace – sons and daughters of kings and presidents and generals – are raised together in small, isolated schools called Preceptures. There, they learn history and political theory, and are taught to gracefully accept what may well be their fate: to die if their countries declare war.

Greta Gustafsen Stuart, Duchess of Halifax and Crown Princess of the Pan-Polar Confederation, is the pride of the North American Precepture. Learned and disciplined, Greta is proud of her role in keeping the global peace, even though, with her country controlling two-thirds of the world’s most war-worthy resource — water — she has little chance of reaching adulthood alive.

Enter Elián Palnik, the Precepture’s newest hostage and biggest problem. Greta’s world begins to tilt the moment she sees Elián dragged into the school in chains. The Precepture’s insidious surveillance, its small punishments and rewards, can make no dent in Elián, who is not interested in dignity and tradition, and doesn’t even accept the right of the UN to keep hostages.

What will happen to Elián and Greta as their two nations inch closer to war? (Goodreads)

Once Upon a Time, at the End of the World

Sit down, kiddies. Let me tell you a story.

* I received an advanced copy of this book from the publisher at the Ontario Book Blogger Meet-Up. This does not affect my opinion or my review *

Where do I even start with this book? I first heard about it around the time everyone was attending BEA. I can’t remember where I first saw the cover but as soon as I did, I was in love. I immediately ran to Goodreads to check out the synopsis and knew I had to read it.

The premise of the story was something I knew I’d love. Erin blew me out of the water with the delivery though. If you follow me on Twitter, you likely saw/see me obsessing over Talis, the AI in charge of the world in The Scorpion Rules. He’s everything. I have affectionately taken to calling him Sassy Talis. This character was so incredibly well-written. His dialogue was dripping with sarcasm and was incredibly witty. He had me right from the prologue with this:

Borders strained, checkpoints broke, and of course people started shooting, because that’s what passes for problem-solving among humans. See, guys, this is why you can’t have nice things.

So sassy, right?! I actually laughed out loud at that part. I’m not ashamed to say that I would pay good money for a book of just the Utterances of Talis. He’s brilliant and cruel but somehow also makes you love him. It’s rare that I manage to like the bad guy but Bow left me no choice with this one.

I will also never understand how or why it happened but the goats were some of my favourite characters as well. They never say a word but they’re wildly interesting. If there’s mischief, you can almost bet on the fact that the goats are involved. I seriously love them.

My last character love-fest is about Elián. He’s a trouble maker, stubborn as a goat (ALL THE GOATS), incredibly quick-witted, and a little sassy in his own right. I admire his strength and rebellious attitude. I also love that he’s able to (at least to an extent) reign it in for the good of the others. Often the trouble maker “just can’t help it” or doesn’t seem to really care what his actions do as long as they further his cause. In his case, however, we see some remorse and that he realizes he’s hurting his friends who care about him.

The events of this story create such a great atmosphere. It was tense, complex, and exhilarating. I definitely felt my heart racing and had anxious moments while I was reading. Between the things I wanted to happen, things I didn’t want to happen, and having zero idea what the heck was coming up, The Scorpion Rules kept me on my toes. Even the ‘slow’ parts were incredibly exciting. How…just how?!

I also loved how Bow showed how deeply flawed Talis’ system of rule is. Obviously, as humans, it’s highly unlikely we’ll ever find a system of governing one another that is absolutely perfect. All the same, Talis seems pretty pleased with himself and the setup he’s put in place. You can tell he derives immense pleasure from the power he has and the ease with which he exercises that power (even to brutal extremes) is astonishing. It’s also an eye-opening look at what we could come to as a society if faced with extreme shortages of resources.

The Scorpion Rules is an interesting look at what is necessary, what we think is right, and what we want to do. It’s rare that any one action covers all three of those things, and Bow’s book explores just how difficult choosing between these options can be. What is often necessary for the safety and best interest of the majority isn’t always the most pleasant decision for some. The way Talis has set up his society, the few must sacrifice to keep things working for the many. In this case, the ‘necessary’ happens to be sacrificing human life which is, naturally, a more distasteful thing for most to accept but that’s what makes Bow’s book so amazing. Sh wasn’t afraid to get messy and explore the not-so-pleasant side of human nature.

I will force this book on everyone and anyone. I do not care if they don’t read YA, don’t read fiction, etc. Nobody is exempt from giving this piece of art a shot. I cannot wait to give this a reread. And then another. I’m also still hoping Erin puts together an actual book of The Utterances because Talis is brilliant…and I’d read his food journal to be honest. (Yes, I know that an AI food journal isn’t a thing. This just proves my point further.)

3 thoughts on “The Scorpion Rules by Erin Bow”