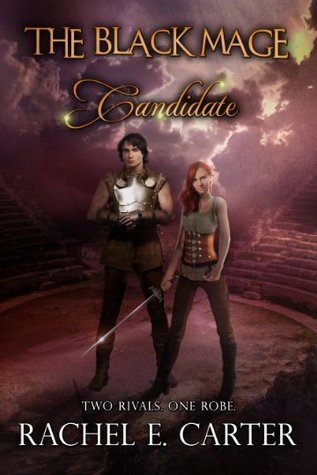 Welcome to the Candidacy. Where dreams go to die.

Twenty-year-old Ryiah is a black mage of Combat, but she is not the Black Mage. Yet. She’s had her eyes on the legendary robe for as long as she can remember, and in just one year she will have a chance at her country’s prestigious –and only- tourney for mages… Too bad she is going up against a certain non-heir. The one person she has yet to beat.

Meanwhile Ry has a year to prove herself in her new role as a war mage and the prince’s betrothed. Neither is quite what she expected and complications arise on both fronts. War is on the horizon, and with so many enemies the kingdom of Jerar’s fate is more than ever at risk.

The Candidacy finally arrives, but it’s only the beginning. Nothing can prepare her for what comes next. (Goodreads)

Darren laughed softly. It was like water. The sound of a stream cascading down rock, low and unhurried. Silky. Confident. “You don’t really think you can beat me, Ryiah.”

**I received this book for review from the author. This does not affect my opinion or review.**

I have been a fan of this series since the very beginning. I felt a strong connection with Ryiah in First Year and it’s been growing exponentially in each subsequent book. She is everything I want in a kick-ass female lead. Ryiah is flawed, strong, confident, talented, a little love-struck, and very stubborn. I admire how she is able to care so much about the people around her but still turn around and kick some serious butt. Everything in her world has been working against her and her dream to be the Black Mage but somehow she’s still clawing her way through and trying to make it a reality.

I love how Rachel makes things a little messy in this series. There is no cut and dry concept of good and bad. As soon as you make up your mind about something, you’re given some new piece of information that totally throws you for a loop. Nothing can be taken at face-value in the political landscape of this world (much like it can’t in our world either) and the entire Black Mage series shows just how delicate the balance of power is. No decision is easy and it’s almost impossible to know or account for what every individual’s motivation (ulterior motive?) is. This is how Rachel got my heart racing so many times throughout Candidate. There are so many tense moments that suck you right in. You feel like you’re on the brink of danger and political turmoil the whole way through, just like Ryiah and the rest of Jerar. I feel like I have become a citizen of Jerar myself.

Another thing done incredibly well in the Black Mage books, which has gotten even better in Candidate, is how the love stories unfold. They’re a big part of the story while also taking a backseat to the other goings on as well. Yes, Ryiah is a normal teenage girl. She has feelings and crushes and is confused about those feelings and crushes. What we see most though is her stubbornness and dedication to being THE Black Mage. The love interests, not just for Ryiah but everyone else as well, only appear when it makes sense for them to. It’s lovey-dovey but not “gag me” levels of it. Don’t get me wrong, I love excessive romance and cheesiness but only when I’m in the mood for it. So thanks for the heavy dose of ass-kicking and action, Rachel!!

My main reaction while reading and after finishing Candidate was, “HOLY PLOT TWISTS BATMAN!” Every time I thought I had things all figured out, things did a 180 and I was left with my mouth hanging open. Here’s a look at some of my reactions while reading:

And by the end it was just totally unexpected and out of control. I worried briefly that I’d have to seek out a cardiologist because I was at the edge of my seat while reading, struggling to go on like this

To be totally honest, I’m surprised I’m sitting here able to write this. I’m glad I made it through in good health. You’re a wizard, Rachel. There’s nothing I love more than a plot that keeps my heart racing and me on my toes! Candidate made me more anxious than an episode of 24.

The entire Black Mage series, Candidate included, is riveting. All three books to date have been so well connected, with memories of Ryiah’s escapades in previous books being woven seamlessly into subsequent stories. There’s never a dull moment; even if things do slow down, you know something else is brewing just below the surface. The characters are real, I’m partial to Ryiah because I see so much of myself in her. The elements in the story (romance, action, politics) are also balanced incredibly well.

I highly recommend Candidate to people that love this kind of story. It’s the most exciting book so far in the series, which is saying a lot because the first two were pretty freakin’ exhilarating too!!! Okay, now is it time for book 4?