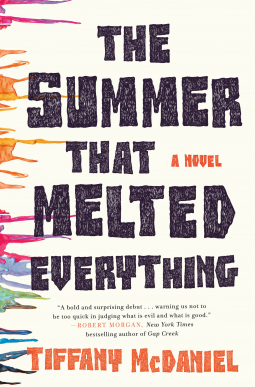 The Summer that Melted Everything

Fielding Bliss has never forgotten the summer of 1984: the year a heat wave scorched Breathed, Ohio. The year he became friends with the devil.

Sal seems to appear out of nowhere – a bruised and tattered thirteen-year-old boy claiming to be the devil himself answering an invitation. Fielding Bliss, the son of a local prosecutor, brings him home where he’s welcomed into the Bliss family, assuming he’s a runaway from a nearby farm town.

When word spreads that the devil has come to Breathed, not everyone is happy to welcome this self-proclaimed fallen angel. Murmurs follow him and tensions rise, along with the temperatures as an unbearable heat wave rolls into town right along with him. As strange accidents start to occur, riled by the feverish heat, some in the town start to believe that Sal is exactly who he claims to be. While the Bliss family wrestles with their own personal demons, a fanatic drives the town to the brink of a catastrophe that will change this sleepy Ohio backwater forever. (Goodreads)

* I received an eGalley of this book from the author in exchange for an honest review. This does not affect my opinion*

I honestly don’t know where to start with this book. I went in and thought I was mentally prepared having read the synopsis and snippets of reviews but man, it got me hard. The Summer That Melted Everything is dark, thought-provoking, and heartbreaking.

The book is set up with Fielding Bliss as the narrator; alternating between his current, elderly self and his 13-year-old self from the summer of 1984. At first, this threw me for a loop and I struggled to flow with the changes but I was able to fall into a rhythm after a few chapters. At that point, it was great to be able to compare the innocence of him before the pain of that summer and the dark, damaged man he grew into to after the events of 1984. We all lose that youthful innocence to a certain extent as we grow older but Fielding’s shift was drastic to say the least.

The whole concept of ‘devil’ in general is fascinating. To see how quickly people are willing to bestow that title on a young boy; how quickly he was not only villainized but also victimized. It was also heart-wrenching to see why they were so willing to believe it was him, the things they said to him “because he was the devil”. I think the mot jarring part was reflecting back on where we are as a society today and realizing that these things are still very real. The Summer That Melted Everything was a very sobering look at how poorly some humans treat others. This book makes you think long and hard about who the real ‘devils’ of the world are, what forms they take, and where we encounter them.

Due to the heaviness and darkness of the content, this book took me a lot longer to read than I had expected. I needed frequent breaks to stop, process, and work through what I had just read. This is not something that you can breeze through. I’ve been having trouble getting through books lately but have had no idea why. It was nice to know that I was struggling just because the story was so intense and not a result of my curse.

I found all the characters in The Summer That Melted Everything to be incredibly compelling. They made me feel deeply; I was invested in their well-being and the outcomes of their stories. They were all incredibly complex and had back stories that were revealed slowly throughout the narrative. These explained how each person got to where they were in their lives and gave the town, which at first seemed quite simple, a lot of depth.

Finally, the writing was gorgeous. I could feel the heat as I was reading (I think the humidity here helped that a bit too). I had such a strong sense of what Breathed was like, what the people were like, how tense the situation was. Just stunning. I want to order a finished copy eventually so I can read through it again with a highlighter. This is definitely a book that I want to annotate ’til the cows come home.

I highly recommend this book, no question about it. Do not take it lightly but read it. Seriously, this was brutal in the best way. It was dark, heartbreaking, uncomfortable. No joke, I almost cried in the middle of a cafe while reading the last part.