Hey everyone! I’ve got a stop on the blog tour being hosted by the lovely folks at Raincoast for The Cabin today! I read Awake by Natasha last year and it made her name really stick in my mind. Naturally, when this was introduced at the Fall Preview I couldn’t help but get jazzed for some new twists and turns and second-guessing myself courtesy of Ms. Preston! Check out my review and scroll on down to read the excerpt after for your first taste of The Cabin! (Also, make sure to stop by the other blogs on the tour for more reviews and excerpts!) 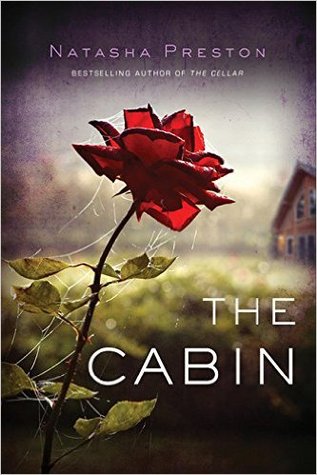 There may only be one killer, but no one is innocent in this new thriller from Natasha Preston, author of The Cellar and Awake.

When Mackenzie treks to a secluded cabin in the woods with six friends, she expects a fun weekend of partying, drinking, and hookups. But when they wake to find two of their own dead and covered in blood, it’s clear there’s a killer among them.

As the police try to unravel the case, Mackenzie launches her own investigation. Before long secrets start to emerge, revealing a sinister web of sins among the original seven friends. The killer is still free. Every one of them is a suspect. And Mackenzie starts to realize that no one is innocent…

I have become a big fan of twisty-turny books lately. After reading Natasha Preston’s Awake last year, I was excited to see she had another one coming for me to devour this year.

I liked that, whenever I thought I had things figured out, there was something that made me question the validity of my theory. I’ve become decently good at sniffing out even the most obscure of endings but this one had me on my toes and I never fully settled on convicting any one person in my mind. Also, while I went in expecting and hoping that most of the action would take place in the actual cabin, it didn’t and I was totally okay with that. It made the mystery seem that much more ‘impossible’ to solve because there were now so many variables as they were taken outside of the crime scene.

I tend to form very strong attachments to characters but with The Cabin, I found my feels were mostly focused on the characters as a collective rather than any one individual. I will say I had a soft spot for Blake. I didn’t like him at all at first but he grew on me. I don’t think I’d make him a book boyfriend but I’d totally hang out with him any day. Mackenzie tugged on my heart strings a lot because, while I admire her loyalty and fierce defense of her thoughts on people, I also wanted to slap her silly for being so reckless and having little regard for her own personal safety. Yay for sticking up for the people you care about but BE SAFE GIRL!!!

The only thing I didn’t really like about this book was the ending. This is mostly a personal preference thing. It felt like there were as many twists and turns in the last 20 pages as in the rest of the book and while I like fast-paced, that was a little too fast for me. Also how things wrapped-up in the end drove me up the wall. Depending on the story, I like things in nice tidy packages when all is said and done and The Cabin didn’t give me that even though I desperately wanted it. I can definitely see how some people would love how this ends though. It’s definitely exciting so do not get fooled into thinking you ever know the truth until you read the last word 😉 .

Overall, I really enjoyed this book. I went in wanting to be kept guessing and to pretty much not trust anybody and that’s exactly what happened. At points I didn’t even trust the MC even though it was told from her POV 😂. #ShiftyEyes

Head on down and check out the excerpt I have for you and see what The Cabin is all about for yourself!

I cracked my eyes open and they were immediately stung by the evil morning light. It didn’t help that the room was a bright yellow. Groaning, I ran my hands over my face. I felt like I’d been hit by a bus. My head throbbed, and every time I swallowed, I felt as if I were downing sawdust. To make matters worse, this time Blake wasn’t waking me up. My hangovers weren’t usually this bad. Last night, I had drunk a lot, but nowhere near enough to feel as awful as I did. When had I become such a humongous lightweight? Blake lay on his side, with one arm and one leg thrown over me. He looked peaceful. Whatever weighed on his mind during the day didn’t trouble him while he slept.

Biting my lip, I watched him sleep, feeling a bit like a creeper. I had never had a one–night stand, so my experience with the morning after was nonexistent. I knew the general idea was to leave ASAP, but in this situation, that was impossible. We were spending the weekend in the same secluded place, and it’s not like I had my own car.

Oh God. I had a one–night stand! I tried to calm myself. It’s fine. You’re an adult, remember? Adults do this all the time. But I didn’t. Why had I allowed myself to sleep with Blake when I hadn’t even known him twenty–four hours?

Shut up, it’s fine. You’re allowed to be into a guy, to have a good time.

I had to get a grip. There was nothing I could do to change what had happened. But neither of us needed to freak out or make this awkward—-and by neither of us, I meant me. We were attracted to each other and acted on it. We were both into it, both consenting adults. It’d be fine. Besides, I felt too ill to worry much anyway.

Pushing myself up, I flopped and fell back against the mattress. My heavy stomach rolled. Oh God. I had no energy. I needed water, aspirin, and to throw up the remaining alcohol that was still sloshing around in my system.

My movements woke Blake. He removed his hand from my stomach and rubbed his face. “I feel like death,” he groaned.

Blushing because of the situation we were in, I replied, “Join the club.”

He smiled at me. “How do you not look like hell in the morning? I mean, you’ve got that stunning, post–sex glow that’s turning me on.”

Seriously? “How can you feel like crap and still want sex?”

He replied, “Have you ever seen yourself, Mackenzie?”

His comment made me bite my lip. I didn’t think I was that pretty, but I kind of loved how he saw me. Everyone wanted someone to think they were special, and my ex never had. Blake made me feel sexy and appreciated, which was nice, even if I broke my own rules.

Chuckling quietly, he shoved himself up and reached for his jeans. “I need food and strong coffee. Do you know what everyone has planned for today?”

Following his lead, I grabbed my clothes and started to get dressed. I flicked my gaze at him to make sure he wasn’t looking at me. He was. “We’re going down to the lake to swim. Aaron wants to feed everyone barbecue food all day; then we’re making a bonfire in the evening.”

Blake stilled. “You’re making a fire in the middle of the forest?”

“At least not purposefully,” he muttered. “I’m overseeing that.”

“Oversee away. I’m sure Aaron would love the help.”

“It’s not Aaron I want to hang out with.”

He lifted an eyebrow while staring into my eyes. “Yes, it is.”

If he kept looking at me like that, I was going to explode. I already felt too hot.

Thanks for stopping by!

Will you be reading The Cabin? Have you read any other books by Natasha? Drop me a comment and let me know!