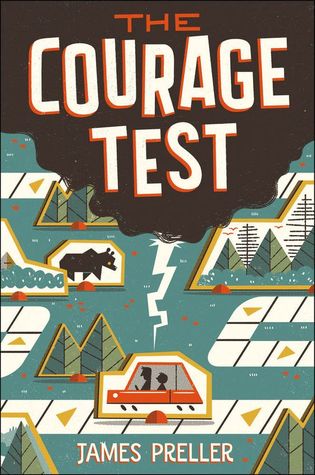 Will has no choice. His father drags him along on a wilderness adventure in the footsteps of legendary explorers Lewis and Clark–whether he likes it or not. All the while, Will senses that something about this trip isn’t quite right.

Along the journey, Will meets fascinating strangers and experiences new thrills, including mountain cliffs, whitewater rapids, and a heart-hammering bear encounter.

It is a journey into the soul of America’s past, and the meaning of family in the future. In the end, Will must face his own, life-changing test of courage.

A father-and-son journey along the Lewis and Clark Trail–from Fort Mandan to the shining sea–offers readers a genre-bending blend of American history, thrilling action, and personal discovery. (Goodreads)

* I received a copy of this book from the publisher in exchange for an honest review. This does not in any way affect my opinion. *

Going on a history-filled adventure along the Lewis and Clark Trail will never win out over baseball when you’re a kid like Will. To be totally honest, I’d be just about as unimpressed as he is. There is nothing worse than missing out on something you’ve been bouncing off the walls waiting for in favour of something your excitement is lukewarm about at best. Naturally, we wouldn’t have much of a story if he was just miserably and moped the whole time so Will and his father end up on one heck of an adventure.

I know zilch about American history so this was both a crash course and flew way over my head. Will, however had lessons of his own to learn on this adventure. Yes, he did learn more about history and what things were like but he also learned about himself, the people around him, and just life in general. Sure, he still had moments of sulking and being a young boy who had better things to do but showed a lot of growth as well.

It’s also just a plain ole fun adventure. Rapids, bears, roughing it while camping out…in terms of being dragged on a trip you aren’t too thrilled about this is at least not a boring one. I’m pretty sure I was taken on my fair share of trips that I was less than enthusiastic about that turned out to be a ton of fun when I was Will’s age. It’s easy for kids to groan and be a little embarrassed about their parents but a majority of the time they have a ton of fun with them. Will’s experience is no different…not that he wants to admit it! 😛

I found Will to be a very authentic character for me. He reminds me a lot of my brother when he was that age (before he became teenage hulk). Will’s interaction with and thoughts on his father, with whom he has an obviously strained relationship sometimes, also felt very real. I’ve read a lot of female MC’s as of late and it was incredibly refreshing to read a story focused on a young boy and his father. (Give me all the kick-butt ladies still, I will gladly gorge myself on stories like that, I just love to throw some variety in as well.)

This was a super fun and quick middle grade read. It fit so well with the last days of summer and had just enough adventure to make feel like I’d had my own awesome summer vacation. Lions and tigers and bears, oh my! (Okay, there were only bears) If you’re looking from some outdoorsy excitement, I definitely suggest you pick up The Courage Test!