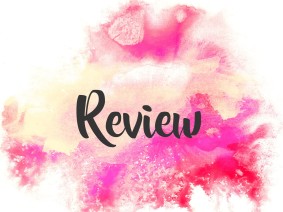 Four girls with the power to control the elements and save the world from a terrible evil must come together in the first epic novel in a brand-new series.

When Phantoms—massive beasts made from nightmares and darkness—suddenly appeared and began terrorizing the world, four girls, the Effigies, each gained a unique power to control one of the classical elements: earth, air, fire, and water. Since then, four girls across the world have continually fought against the Phantoms, fulfilling their cosmic duty. And when one Effigy dies, another girl gains her power as a replacement.

But now, with technologies in place to protect the world’s major cities from Phantom attacks, the Effigies have stopped defending humanity and, instead, have become international celebrities, with their heroic feats ranked, televised, and talked about in online fandoms.

Until the day that New York City’s protection against the Phantoms fails, a man seems to be able to control them by sheer force of will, and Maia, a high school student, unexpectedly becomes the Fire Effigy.

Now Maia has been thrown into battle with three girls who want nothing to do with one another. But with the first human villain that the girls have ever faced, and an army of Phantoms preparing for attack, there isn’t much time for the Effigies to learn how to work together.

Can the girls take control of their destinies before the world is destroyed forever? (Goodreads)

Fate of Flames was pitched to me as Sailor Moon meets a couple other things (I stopped listening at Sailor Moon because that was ALL I needed to develope a bad case of the grabby hands for this book). It definitely didn’t disappoint me on that front. I totally got those vibes while reading and there was even someone I had a crush on as intensly as I crushed on Tuxedo Mask as a kid.

This book was also another instance of one of my favourite types of characters lately: the flawed, strong-as-heck female! Female leads like this are SO important in YA so that we’re teaching young girls that even the greatest of wome have off days. There’s so much representation of females being weak in the world and that us being emotional is a detrimental weakness. Characters like those in Fate of Flames show us that emotions don’t make us weak and bad days don’t discredit our power. Sure, the Effigies are flawed but HOLY MOLY are they tough!

The action in Fate of Flames was also awesome. Any time there had been a lull in action for a while things picked up and got super exiting right before the pause was ‘too long’. Pace is becoming a big thing for me and I found this book to be really well done in that area. Not too much, non-stop, action that I felt overwhelmed but I also never found myself bored. This helped me really fly through my reading and I’m honestly so desperate for the second book in the series now!

I’m also a sucker for swoony boys and I definitely swooned over Rhys. Part of that may have been because I still have feels over Rhys from Sarah J. Maas’ A Court of Mist and Fury. I won’t completely discredit Fate of Flames‘ Rhys powers though because he’s heart-eyes worthy in his own right. He’s an agent…actually, “Hot Sect Agent” according to Mia (ARC, pg. 18), he’s assertive, skilled. Helloooooo crush material. Can I mix the two Rhyses together and have hybrid for myself?

The powers/magic and creatures in this book were so awesome. They were both very familiar but also fresh and exciting. I’ll admit the Phantoms we’re incredibly terrifying but also very attention-grabbing.

I loved this book! It has so many exciting elements, LOTS of kick-ass ladies, Phantoms, and a swoony boy. I couldn’t ask for much more…except for maybe book 2 RIGHT NOW! 😛

The awesome people at Simon & Schuster Canada are offering up a signed copy of Fate of Flames so head to the Rafflecopter below and get your entries in!

Also, don’t forget to check out the other stops on this tour for more reviews and fun extras! 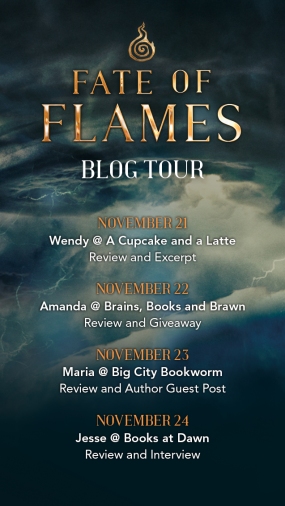