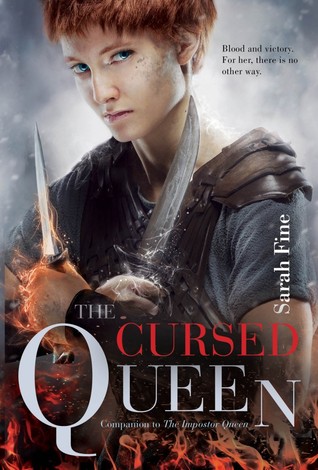 Ansa has always been a fighter.

As a child, she fought the invaders who murdered her parents and snatched her as a raid prize. She fought for her place next to Thyra, the daughter of the Krigere Chieftain. She fought for her status as a warrior in her tribe: blood and victory are her way of life. But the day her Krigere cross the great lake and threaten the witch queen of the Kupari, everything changes.

Cursed by the queen with fire and ice, Ansa is forced to fight against an invisible enemy—the dark magic that has embedded itself deep in her bones. The more she seeks to hide it, the more dangerous it becomes. And with the Krigere numbers decimated and the tribe under threat from the traitorous brother of the dead Chieftain, Ansa is torn between her loyalty to the Krigere, her love for Thyra, and her own survival instincts.

With her world in chaos and each side wanting to claim her for their own, only one thing is certain: unless Ansa can control the terrible magic inside her, everything she’s fought for will be destroyed.  (Goodreads)

Last year I read The Impostor Queen and immediately fell in love (you can find my review here). I will admit that I wasn’t thrilled that none of my babies from the first book would appear in this book but as I was reading, I realized how Ansa’s story complemented Ellie’s and found new characters whose well-being I was fully invested in.

The story itself was intriguing. The constant struggles, the power plays, the action…it all had me hooked. The pacing was overall pretty good although I did find at a couple parts I found my attention waning. The action and exciting bits (not included because spoilers) 100% made up for it though; I felt my blood pressure rise every time someone was  in danger or something exciting was happening.

This was another book with badass females for my collection as well. I’m all about the ladies that can hold their own and even rival men that are bigger and stronger. I found it hard to connect to the blood-lust of the Krigere people but I loved how self-sufficient the women were; it’s not a society where the only warriors are men and that’s the end of that.

I thought it was very interesting that Sarah Fine set The Cursed Queen in a completely different, much further part of her world. It wasn’t unexpected, as this is a companion, but it was cool to see another part of the land looked at more in depth rather than be thrust back into the same setting. This book also had a more rustic feel to it as so much of the beginning happens in the outdoors/less developed living conditions. (Camping, anyone?)

The romance in this companion didn’t make me swoon like the romance in The Impostor Queen as I had hoped it would but I still liked it. The imperfections in Ansa and Thyra’s relationship are very obvious but so is how deeply they care for one another. It definitely makes you think about what makes a good relationship and what the signs of a potentially destructive one are.

I adored The Cursed Queen and I think I may have even liked it a little bit more than The Impostor Queen (which I did not think was possible). The build up of knowing where the events would lead to in the end (when Elli and Ansa’s stories meet) made everything that happened that much more exciting because I was on the lookout for pieces from each that I could connect. I absolutely cannot wait for the final installment in this trilogy because I’m sure sparks are about to fly when these two queens butt heads!

3 thoughts on “The Cursed Queen by Sarah Fine”