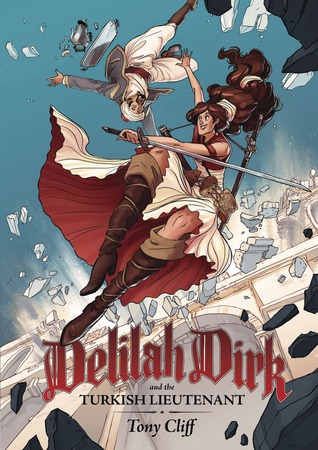 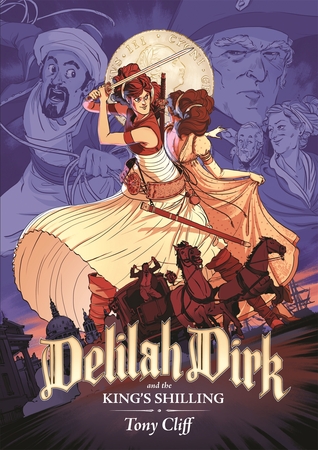 Delilah Dirk is a globetrotter, butt-kicker, and trouble maker. She doesn’t take no for an answer and always charges ahead full-steam if she truly believes in something. These books were incredibly entertaining! Delilah’s adventures were exciting, terrifying, and often hilarious. I raced through both The Turkish Lieutenant and The King’s Shilling because I needed to know how the stories ended and because I was so ensnared by the stories. Delilah and Selim are such an unlikely pairing of travel partners that every step they take is one step closer to the next part of their comedy of errors.

As a main character, Delilah is amazing! Yes, she is flawed, rash, and a little wild but she is also incredibly strong. She doesn’t let others tell her what she can and can’t do, she doesn’t let others tell her she can’t do something because she’s a female. Delilah sets her mind to a task and she treks on until she reaches the goal. She is such an incredible character for girls to see in a book because she proves that we’re more than capable of being amazing, strong, heroic, and smart as well.

The illustrations in this were also absolutely stunning. I found myself stopping in the middle of reading just to stare at the art…and then Snapchat it…and post a picture on my Instagram story…and then stare at it some more. Some of the full-page pieces are ones I wish I could frame and hang up around the house one day because they are so beautiful.

I adored every second I spent reading the Delilah Dirk books and I sincerely hope there are more in the future because she is a character that very quickly became extremely dear to me. I highly recommend these two titles for anyone and everyone regardless of age or gender. I had so much fun and am so glad these were recommended to me!

One thought on “The Delilah Dirk Series”