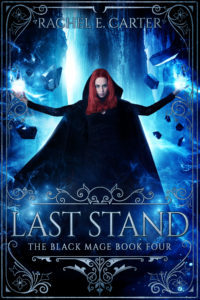 He’s the Black Mage and she’s the traitor to the Crown.

Ryiah’s world was shattered the night she discovered King Blayne’s nefarious plans. Now, she has to betray the one she loves most in order to save the realm from war. Torn between love and duty, Ry finds herself on a perilous mission to help the rebels and convince the kingdom of Pythus not to honor its pact with the corrupt king of Jerar—all the while deceiving the most powerful mage in the realm, the very man sworn to protect the Crown and hunt the rebels at all costs: her husband.

She’s one step ahead, but sooner or later the curtain will fall.

Sooner or later, she’ll have to fight.

Witness the epic conclusion of The Black Mage series, and see just how far one girl will go to save her kingdom and the boy she loves—even when that boy has become the enemy. (Goodreads)

*I received an advance copy of this book from the author in exchange for an honest opinion. This does not affect my opinion.*

I have such an attachment to this series. I’ve reviewed First Year and Candidate (I don’t know how I missed reviewing Apprentice or where my review went but trust me it’s awesome too!) on Brains, Books, and Brawn. I am so in love with The Black Mage books and have definitely been looking forward to the conclusion since about 2 seconds after I finished Candidate 😀 .

We all know how I feel (fear) highly anticipated books…especially sequels. Mind you, Rachel has been dropping some pretty awesome teasers from Last Stand and the novella Non-Heir so I was pretty well hooked even before I got my grubby little mitts on Last Stand.

This was such a satisfying finale. There was so much drama, excitement, scheming, and intrigue. I always thought I had things figured out and then Rachel flipped it all on me and threw in plot twists all over the place.

Last Stand also tore my heart out with the love story aspect of this one as well. I’ve been shipping so hard since she left me no choice in book 1 and then used that to induce mega feels throughout the whole story. I found myself yelling NOOOOOOO very often.

In terms of how the series was wrapped up, I really loved the conclusion given in Last Stand. It wrapped the story up well but also not in the way I was anticipating. It was closed enough that it felt complete but also left room for my imagination to run a little wild thinking about what the characters got up to after the events of the book.

There is also, of course, my favourite thing. A badass female lead. Ryiah only gets tougher as time goes on and her growth has been amazing to follow!

Love. Love love love. It had everything I wanted from the conclusion of this series and then some. It’s so exciting to see this series through to the end. Ryiah is such a badass and I loved watching her journey. I highly recommend this entire series!