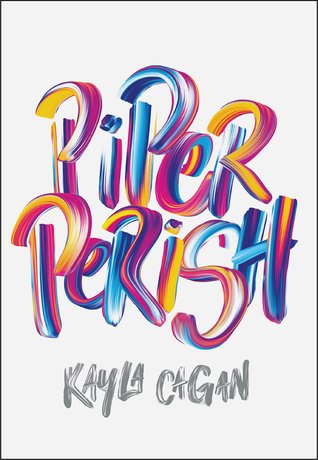 Now is the time for fearlessness.

Piper Perish inhales air and exhales art. The sooner she and her best friends can get out of Houston and get to New York City, the better. Art school has been Piper’s dream her whole life, and now that senior year is halfway over, she’s never felt more ready. But in the final months before graduation, things are weird with her friends and stressful with three different guys, and Piper’s sister’s tyrannical mental state seems to thwart every attempt at happiness for the close-knit Perish family. Piper’s art just might be enough to get her out. But is she brave enough to seize that power, even if it means giving up what she’s always known? (Goodreads)

Piper Perish was an emotional roller coaster for not just Piper but also for me. I don’t quite know what exactly I expected going into it but I definitely wasn’t totally waiting for what I got.

From the synopsis, I knew Piper wasn’t having an easy time of her last year of high school. It’s a notoriously high-stress point in almost every young person’s life to varying degrees but man, Piper really has it bad. So many aspects of her life start to unravel almost simultaneously (no details because spoilers suck…just trust me) it’s a wonder she didn’t pack it in all together. Each thing individually would have been a lot for one teen to handle and she had to deal with all of them.

At first, I’ll be totally honest, I didn’t really like Piper and her group of friends. They were incredibly grating for me to read and I found her voice as the narrator irritating. Then, just under halfway through, I found myself wanting to shake her less and less. I realized I was actually growing to like Piper quite a bit. Sure, she still had moments when I wanted to slap her and be like, “Girl, get your sh*t together!” To be fair though, I’m that way with a lot of teens/people in general. I feel that Piper showed a lot of growth and became much more mature as she navigated her way through all the crap life was throwing at her. (Not cool, by the way, Life.) At the end of the book I was left sitting there and thinking, “Ugh now I need to know what happens in the next part of her journey!” (Seriously though, I need to know. I’d even be happy with a novella.)

As someone who has pretty much 0% artist in them, it was super cool to see the artistic process and how sometimes people don’t really know what they’re creating until it’s done. If I attempt to do anything creative, I have to plan it 7 ways to Sunday and still don’t feel ready. Piper just lets stuff flow out of her and goes where it takes her. *pouts* I’m jealous. Even more so because when she wings it like that it turns out brilliant.

The relationships in Piper Perish were also interesting. At first, as mentioned, I sort of wanted to pinch Piper and drag her out of her funk and yell “what the heck are you doing?” Then I thought about it and had a serious ‘pot calling the kettle black’ moment. Hanging on to people/relationships (both friendly and romantic) longer than I should is a (not so) super power of mine so I found myself settling for a fist bump and whispering “okay but seriously Piper, wake up and let go.” The dynamic between Piper and those around her is definitely perplexing. She learns more than a couple of lessons on forgiveness, friendship, how to be supportive, and how to cooperate even in the toughest of situations though. How she manages to wade through all that tension is a mystery I will never solve. Marli still drives me nuts though and I’m sure she’ll continue to do the same to poor Piper for a while to come.

Finally, the format of this book was super cool. There were doodles and art throughout and it was told through her journal. I found that made me fly through it easier especially once I got into the story. I’m a huge fan of the alternative formats that have become really popular so this was great. I wont lie though, I felt a little like I was snooping through her diary :p .

Piper Perish was an art and drama-filled coming of age story. From the stress of planning the next step in life to struggles with boys and close friends, I related with what Piper was experiencing in her senior year on so many levels. It also made me desperately want to be an artist even though I have 0 talent for it whatsoever. A girl can dream!

Q: What is your favourite creative outlet?

A: Dancing, dancing, dancing!  Anytime I can dance, I will. I take dance breaks when I’m writing, I go out dancing with friends and/or my husband. Anytime I’m on a dance floor, I’m happy. I like hip hop, soul, and rock. I’ll goof out dancing over show tunes, too. Basically, I’m your annoying friend who won’t stop dancing.