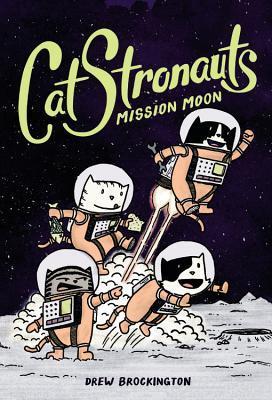 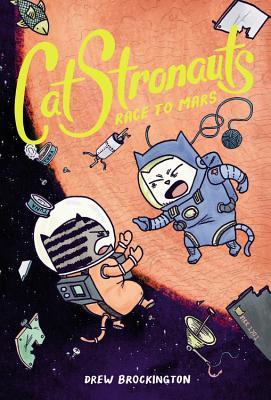 Where to get it:

Mission Moon – CatStronauts, you are needed!
When the world is thrust into darkness due to a global energy shortage, the Worlds Best Scientist comes up with a bold plan to set up a solar power plant on the moon. But someone has to go up there to set it up, and that adventure falls to the CatStronauts, the best space cats on the planet! Meet the fearless commander Major Meowser, brave-but-hungry pilot Waffles, genius technician and inventor Blanket, and quick thinking science officer Pom Pom on their most important mission yet!

Race to Mars – Fresh off of their heroic mission to save the world, the CatStronauts–Major Meowser, Pom Pom, Blanket and Waffles–are taking a well deserved victory lap. Parades and fancy awards dinners are the new norm!

But around the world, other cat space programs are watching–in particular the CosmoCats, the first cats to go to space! With national pride and scientific research on the line, the world’s space programs rush to be the first cats to Mars, and the CatStronauts are starting months behind! Can they catch up and prove their first mission was no fluke?

I first heard about CatStronauts at the end of January during a lunch with Hachette Canada staff and Elly Blake. Conversation was all over the bookish map and then all of a sudden we heard the word “Cat” and Patty and I were lost. Needless to say, I sent an email to request the very same day.

As you can imagine, my expectations were sky-high going into reading CatStronauts because I was so freakin’ excited about it. Rest assured, bookish friends…I got everything I hoped for and more!

The cats all have adorable names and their own personalities. I’m partial to Major Meowser and Waffles but they were all great! Their quirks, when thrown together into a fluffy, space team, mean that they’re in for quite the mission.

The plot of both books was, for me as an older reader, pretty simple and I flew threw it but I also expected that going in because of the age it’s written for. That being said, I adored every second of it. The CatStronauts had one heck of an adventure and gave me quite a few good laughs right away.

The art was amazing and in my copy it was only black and white because it was an ARC! I can’t wait to grab a finished copy and see what it looks like all finished. I also desperately want prints of the squad to hang up…because cats…in SPACE.

This is a great middle grade graphic novel. If you do not fall under the umbrella of middle grade but like either graphic novels, space, cats, or adventure (or any combination of the above elements), I still highly recommend it! The first two came out in April and, much to my delight after frantically searching Goodreads, there’s A THIRD ONE COMING. More CatStronauts is the best news you’ll get all week 😉.