Hey everyone! Back in February I had the chance to go to an event put on by the Simon&Schuster Canada to celebrate Taylor Jenkins Reid’s newest book The Seven Husbands of Evelyn Hugo. While there, I was lucky enough to not only meet Taylor (who is amaaaazing and so kind) but also snag an advance copy of the book. Fast forward to June and I’ve been asked to participate in the blog tour, read the book, and fallen in love with Taylor Jenkins Reid’s writing! 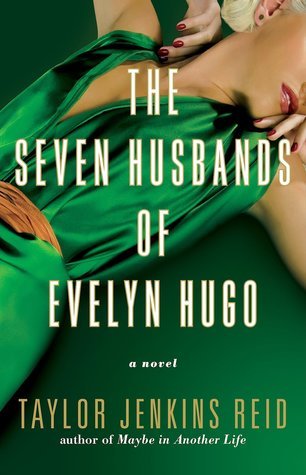 The Seven Husbands of Evelyn Hugo

From Taylor Jenkins Reid comes an unforgettable and sweeping novel about one classic film actress’s relentless rise to the top—the risks she took, the loves she lost, and the long-held secrets the public could never imagine.

Evelyn Hugo is finally ready to tell the truth about her glamorous and scandalous life. But when she chooses unknown magazine reporter Monique Grant for the job, no one in the journalism community is more astounded than Monique herself. Why her? Why now?

Monique is not exactly on top of the world. Her husband, David, has left her, and her career has stagnated. Regardless of why Evelyn has chosen her to write her biography, Monique is determined to use this opportunity to jumpstart her career.

Summoned to Evelyn’s Upper East Side apartment, Monique listens as Evelyn unfurls her story: from making her way to Los Angeles in the 1950s to her decision to leave show business in the late 80s, and, of course, the seven husbands along the way. As Evelyn’s life unfolds through the decades—revealing a ruthless ambition, an unexpected friendship, and a great forbidden love—Monique begins to feel a very a real connection to the actress. But as Evelyn’s story catches up with the present, it becomes clear that her life intersects with Monique’s own in tragic and irreversible ways.

Filled with emotional insight and written with Reid’s signature talent, this is a fascinating journey through the splendor of Old Hollywood into the harsh realities of the present day as two women struggle with what it means—and what it takes—to face the truth. (Goodreads)

*I received an advance copy of this book from Simon&Schuster Canada in exchange for an honest review* this does not affect my opinion.*

Moving and unpacking last month threw me into a huge slump for everything that wasn’t work, pretending to unpack, and napping. The fix for one of my reading slumps is almost exclusively graphic novels or a middle grade read. Alas, June snuck up on me and even though I wasn’t out of my slump I had to start reading Evelyn. Imagine my surprise when all of a sudden I wanted to forestales every responsibility in favour of reading this book! MY SLUMP WAS BUSTED BY ADULT FICTION AND UNICORNS ARE REAL!

I knew right from the beginning that I was going to LOVE this book. The writing is so incredibly captivating that you can’t help but want more. It felt so real, as if I could feasibly be the one interviewing this mega Hollywood star but also super lush and out of reach at the same time. It was as if I was reading a movie.

Taylor Jenkins Reid also did an incredible job of bribing the characters to life. I spent the entire book fighting the urge to go Google Evelyn Hugo because she was so compelling that I was positive she must be a real person. Even the secondary characters that appear in the stories of her early life felt like people I wanted to be able to look up pictures of. I wanted to go on Netflix and binge watch movies featuring Evelyn and her cohorts…all the time. I also loved Monique and all her flaws, ideals, and fierce ambition. She was a great person to place opposite Evelyn and her story arc was also captivating.

Now the story itself was another stunning part of this read. It was full of the glitz and glamour one would expect from a tale of Hollywood but it also highlighted the underhanded side of life among the Stars. It wasn’t an action book but it felt like the pace never slowed. I constantly wanted to find more and all the new info on Evelyn’s life was like being on a roller coaster. You never knew what was going to happen or who was going to do what as part of a meticulous, calculated plan. It was intriguing, heartbreaking, and clever.

Although a very flawed character, Evelyn also provides some very strong feminist messages. At one point she discusses the idea of women owning their sexuality and engaging in sexual activities for the purpose of their own pleasure versus it being merely a means to the end of keeping a male in their life satisfied. She’s unapologetic about using men as they would and do use her. Although a slightly flawed and problematic approach, this is Evelyn attempting to level a playing field which is heavily not in her favour for many reasons. She is such a fierce and ambitious woman who shows us all that it’s okay to want things and to try to actually get those things.

WHY HAVEN’T YOU READ THIS YET?