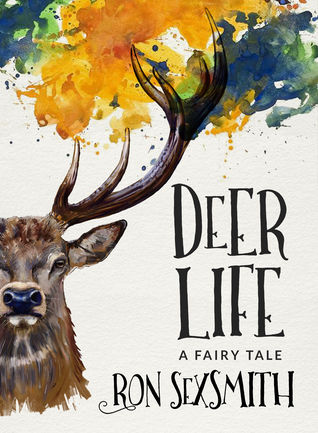 Deryn Hedlight was not having a very good day and it was about to get much worse. He’d read stories of witches as a boy, but never believed for a second they were true. That is, until an unfortunate hunting accident turns his world upside down. What seemed like an honest mistake leads to an altogether unexpected transformation. But poor Deryn wasn’t the only wronged character tied up in these gloomy circumstances and sinister forces.

Deer Life tells the story of a kind-hearted boy from Hinthoven and his motheṟs undying love. Mostly though, it’s all about patience, friendship, and heroism where you least expect it. (Goodreads)

I didn’t quite know what to expect going into this story. I mean…I had a vague sense from the synopsis but I also got the vibe that it would throw me for a few loops as well. Let me tell you, I spent most of my time being thrown for a loop versus thinking HA I KNEW THAT WOULD HAPPEN! Deer Life is, there’s no doubt about it, completely absurd. This story has the feel of a regular fairy tale mixed with some wtf did that just happen. It’s a fun escape and I found myself laughing out loud at so many parts.

I really liked all the characters; even the ones I detested. I felt all the right disdain for the people I should and had warm fuzzies for the good characters. The method Big Eyes used for naming the humans was reminiscent of one of my absolute favourite book animals and animal POVs, Clive from Alice Clayton’s Wallbanger, which definitely made me giggle. I’m so used to seeing animals in movies and TV having human naming systems but I love how realistic it feels to have them completely clueless as to what “John” could possibly be

The story itself was a tad hard for me to follow at points as it jumped from character to character quickly sometimes but ones I got fully lost in the characters and the conflict I found that I was keeping up with no struggle at all. I felt like I was on the journey with all of them and got completely swept up in their feelings and hardships.

This was a really quick and fun read! I love how all the stories that start out separate in the beginning knit together by the end of the book and you see how every family and character is or ends up interconnected. Whimsical, absurd, and entertaining indeed!

1. Are you a plotter or a “pantser”? (i.e. did you know all the major events and exciting parts before you sat down to write or did things that happen in the story surprise you?)

I guess I’m a “pantser” because aside from the basic arc of the story, most of what happens was a complete surprise to me.
I genuinely wanted to see how it ends.

2. Which character has the more pieces/characteristics of yourself in them?

I see myself in both the Deryn Hedlight and Crad Grimsby characters. Just their awkwardness mostly
and their clumsiness too. I think both characters are pretty good natured and I try to be that way too.

3. What surprised you the most about how the process of writing differs from your usual work and writing songs?

I guess the biggest surprised was how immersed I became in the story to the point where I was
quite obsessed and I could see it all as if I was there. Also, just how hard it was compared to songwriting.
Although I wasn’t so much surprised that it was hard but more overwhelmed by how much work it involved
and so in finishing it I felt mentally exhausted.

4. What is your all-time favourite fairy tale?