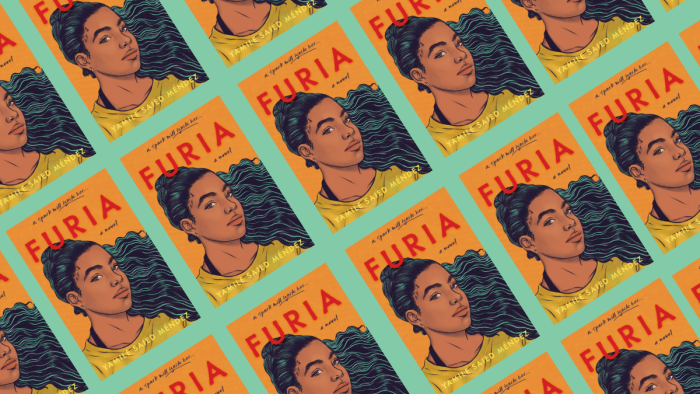 At home, she is a careful daughter, living within her mother’s narrow expectations, in her rising-soccer-star brother’s shadow, and under the abusive rule of her short-tempered father.

On the field, she is La Furia, a powerhouse of skill and talent. When her team qualifies for the South American tournament, Camila gets the chance to see just how far those talents can take her. In her wildest dreams, she’d get an athletic scholarship to a North American university.

But the path ahead isn’t easy. Her parents don’t know about her passion. They wouldn’t allow a girl to play fútbol—and she needs their permission to go any farther. And the boy she once loved is back in town. Since he left, Diego has become an international star, playing in Italy for the renowned team Juventus. Camila doesn’t have time to be distracted by her feelings for him. Things aren’t the same as when he left: she has her own passions and ambitions now, and La Furia cannot be denied. As her life becomes more complicated, Camila is forced to face her secrets and make her way in a world with no place for the dreams and ambition of a girl like her. (Goodreads)

“Maluma smiled at me from the poster on the wall…”

“He listened, and when I was done crying, he wiped my face with the inside of his Pokémon T-shirt.”

“Wish me luck, pretty boy, I begged my poster of Maluma instead before I headed out into the kitchen.”

“Sana, sana, colita de rana,” he whispered. (I cannot hear or read this saying without giggling ever since this video)

“…and Nicky Jam’s voice blared up from one of the houses beyond the trees.”

So basically I was a giddy child over all the pop culture references to some of my favourite artists and things! There were also a couple of Harry Potter references I missed flagging that also made me nostalgic.

*CW: please note there is a pretty detailed passage of domestic violence and various other moments of verbal abuse towards female characters that may trigger readers*
*I received a copy of this book from Algonquin Young Readers for this blog tour. This does not affect my opinion.*

I’ll be totally honest, I don’t even know where to start with this story because I HAVE SO MANY FEELINGS. Furia does so many things so incredibly well. The characters are amazing, the story is exciting/heartbreaking/inspiring/badass, the references to familiar things, the growth…ALL OF IT.

Furia is a powerfully feminist story in which we see the lead character fighting to break the chains restricting what women can be and aspire to in a heavy patriarchal society. Camilla, our passionate fútbolera, chasing her dreams of playing at the professional level in a landscape where women aren’t afforded the same opportunities as the men, like her brother Pablo and childhood friend Diego, is nothing short of brave and inspiring. She knows what that pursuit could cost her but she also knows that she and her Eva María teammates deserve it. She is also steadfast in her determination to make her own way in life and on numerous occasions mentions how she refuses to gain freedom from her household and oppressive father on the coattails of a man, be it her brother or Diego. Watching Camilla grow into her strength as a young woman and make the hard but formative decisions that are best for her is so refreshing and inspiring. I aspire to live with more elements of La Furia in me.

The plot itself is also riveting. Following Camilla’s fútbol journey and having to navigate the complexities of the secrets she’s hiding keeps you on your toes. The romance is adorable and although it was present a lot, it blends into the narrative so well that it’s never really overpowering. While her journey to make it to the next level is exciting, there are also incredibly dark moments. Camilla’s father says some of the most despicable things to his wife, daughter, and as general comments on the world and especially women. As mentioned in the content warning there is also a moment where he escalates from derogatory and vile comments to an instance of physical abuse. The passages were hard to read but a very terrifying reality for many women that I think is important to acknowledge, reflect on, and have open discussions about. There are also very difficult moments

The romance and general relationship between Diego and Camilla is both absolutely adorable and at moments infuriating. You can really see the strong bond and respect that exists between them but there’s also so many hard decisions that have to be made by both parties. I’d honestly pick up a sequel about these two in a heartbeat because I adored their dynamic!

As mentioned in my quotes section I was also LIVINGGGGGGG for the references to popular culture laced throughout the story. I love little ties to the “real” world woven in to fiction as it make the book feel a little more like home. I’m also a little in love with Nicky Jam and Maluma so there’s also that. #shameless

Pick this up. Immediately. Incredible women fighting for their dreams and the safety and power of fellow women is really the type of story our society could use right now.