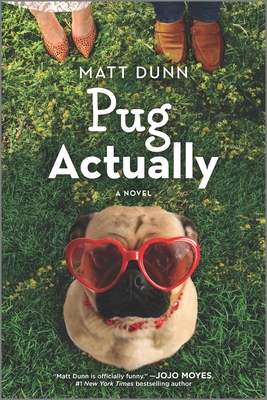 Doug’s human, Julie, has been adrift since she lost her mom (which is strange, because she’s usually pretty good with directions). Doug just wants Julie to be happy, and he doesn’t think she’s going to get there while she’s seeing her married boss, Luke. What’s worse, she’s saying if things don’t work out with Luke, she might end up like her lonely cat-lady neighbor. Horrified by the prospect of a sad Julie and untrustworthy feline companion, Doug decides it’s time for an intervention.

Despite his short legs and some communication roadblocks, Doug sets out on a quirky, sweet, and hilarious mission to find his rescuer the love she deserves. Though he doesn’t totally understand the strangeness of human relationships, he knows he can’t give up on Julie – after all, being a rescue dog works both ways…

When I saw the summary for this book I was HOOKED. Story told from the POV of a fur baby? Sign me up! Funny story though…in between reading the synopsis/signing up for the tour and actually starting to read the book for the tour I managed to forget that Doug the pug is our narrator. I was thrown for quite the loop through the first few pages and when everything finally clicked I had quite the laugh. Doug’s sass and commentary throughout the story is something I didn’t even know I needed but was perfect for the type of story I was subconsciously craving the last little while.

Once I caught on to the narrator situation, I adored Doug. He has a spark of sass, is incredibly loyal to his human, and is very tuned into the human world around him. He’s also a little bit of an instigator which is both incredibly fun and leads to a little bit of chaos. Overall I really liked him as the fearless leader of our story adventure.

Luke is incredibly vile and Doug’s explanation of him adds to the disdain I felt for him as well. He’s meant to be the hated character and that’s exactly the emotion he elicits. Our other lead character, Julie, gave me mixed emotions. On one hand I wanted to hug her and ease the pain and confusion I’m sure she felt daily being in her ‘relationship’ with Luke. On the other hand, I wanted to shake her and tell her to wake the heck up because he was just SO FREAKIN’ AWFUL!! Having been in situations where I’ve overlooked how terrible a guy was for various reasons I can’t blame her but I still wanted to do something to snap her out of that rut she had fallen into with *shudders* Luke. I really did like her though and was excited to watch as her friends and family (yes, this includes our man Doug) were there for her and helped to push her in the right direction! The supporting cast was also incredible. I especially liked Julie’s dad and Priya but all the secondary characters supported the story wonderfully.

The actual romance in the story (aside from Julie’s relationship with the repulsive Luke) was quite the slow burn but I actually really liked them together and the development of their connection. There was a little surprise romance as a secondary storyline as well which was super cute and also gave me the warm fuzzies. This was very much a rom-com vs a traditional, more-steamy romance that I would normally go for but I loved it anyway. It was such a feel-good story that made me squeal with delight on numerous occasions…perfect story for a beautiful summer reading session on the beach, in the park, on your balcony, etc.

It’s the perfect season for a cute rom-com like Pug Actually. Bask in the sun and devour this with an ice-cold drink in hand if you’re looking for a recipe for the perfect summer day!